Ask a Naturalist: How do moles find their way around if they have poor eyesight?

Ask a Naturalist: How do moles find their way around if they have poor eyesight?

Moles are often thought to be blind when in fact they can see; they are, though, colorblind and have poor vision only adapted to recognize light. To find food and to navigate the dark underground, moles rely on their keen sense of smell and touch. Their sense of touch is sensitive and can feel nearby vibrations of activity, allowing them to avoid danger or find invertebrates to feast on.

Moles are small, burrowing mammals who live underground. They are fast diggers and can dig a few inches per minute. In the fall and winter, their digging picks up speed due to the moist soil making it easier to burrow through. Moles spend most of their lives alone, living in their tunnels underground where they continue to dig in search for food. These incredible animals are insectivores, eating invertebrates such as centipedes, millipedes, worms, and insect larvae. 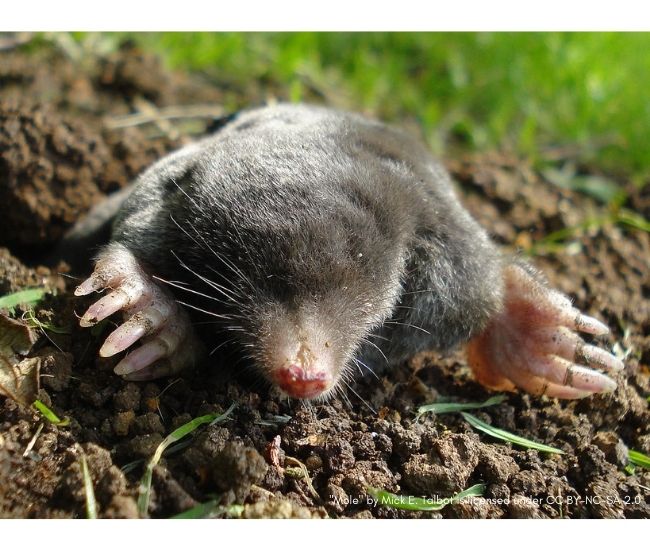 Some predators of moles are badgers, skunks, coyotes, and bird of prey. Moles sometimes come to the surface by accident which poses a risk of being prey to these predators. At night, they can easily fall prey to owls. Moles always prepare multiple tunnels for escape routes in case of danger. They also make storage rooms for stash worms (their favorite food). In one year, they can eat over 50 pounds of worms. Moles also create a chamber during mating season in the spring for their young (called pups); at around one month old, they leave the nest and venture off on their own.

Learn more about moles and how they dig by watching this video (or click the image below)!

Create a cool peek-a-boo mole craft inspires by a book!

Find the missing words to a fun word search that is all about moles!